Return to the News section

A malware attack is when cybercriminals create malicious software that’s installed on someone else’s device without their knowledge to gain access to personal information or to damage the device, usually for financial gain.

Malware attacks can occur on all sorts of devices and operating systems. There are different types of malware as depicted in the image below: 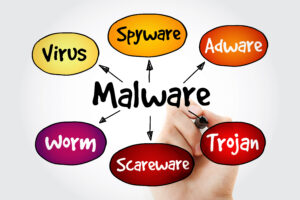 Virus -Computer viruses are small programs or scripts that can negatively affect the health of your computer. These malicious little programs can create files, move files, erase files, consume your computer’s memory, and cause your computer not to function correctly. Some viruses can duplicate themselves, attach themselves to programs, and travel across networks. Opening an infected e-mail attachment is the most common way to get a virus.

Spyware-Spyware can capture information like Web browsing habits, e-mail messages, usernames and passwords, and credit card information. If left unchecked, the software can transmit this data to another person’s computer over the Internet. Spyware can be installed when you open an e-mail attachment containing the malicious software. It can also be installed when you install another program that has a spyware installer attached to it.

Adware– Adware, or advertising supported software, is software that displays unwanted advertisements on your computer. Adware programs will tend to serve you pop-up ads, can change your browser’s homepage, add spyware and just bombard your device with advertisements. It’s not quite a virus and it may not be as obviously malicious as a lot of other problematic code floating around on the Internet. The most common reason for adware is to collect information about you for the purpose of making advertising dollars. It’s called adware when it’s on a computer, and madware when it’s on a mobile device.

Worm-Just like regular worms’ tunnel through dirt and soil, computer worms tunnel through your computer’s memory and hard drive. A computer worm is a type of virus that replicates itself but does not alter any files on your machine. However, worms can still cause havoc by multiplying so many times that they take up all your computer’s available memory or hard disk space.

Scareware- Scareware is a form of malware which uses social engineering to cause shock, anxiety, or the perception of a threat to manipulate users into buying unwanted software. Scareware is part of a class of malicious software that includes rogue security software, ransomware and other scam software that tricks users into believing their computer is infected with a virus, then suggests that they download and pay for reakantivirus software to remove it.

Trojan-A Trojan horse or Trojan is a type of malware that is often disguised as legitimate software. Trojans can be employed by cyber-thieves and hackers trying to gain access to users’ systems. Users are typically tricked by some form of social engineering into loading and executing Trojans on their systems.